He refused chemotherapy and drugs and outlived his doctors!
. 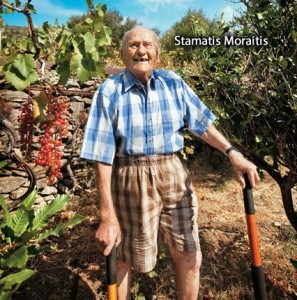 You could say that Stamatis Moraitis forgot to die. The Greek war veteran was diagnosed by 9 different American doctors with lung cancer in 1976. He was given 6 months to live and was encouraged to pursue aggressive cancer treatment. He declined and instead moved back to his native land of Ikaria. Then something incredible happened.

At first, he spent his days in bed, as his mother and wife tended to him. He reconnected with his faith. On Sunday mornings, he hobbled up the hill to a tiny Greek Orthodox chapel where his grandfather once served as a priest.

When his childhood friends discovered that he had moved back, they started showing up every afternoon. They’d talk for hours, an activity that invariably involved a bottle or two of locally produced wine. I might as well die happy, he thought.

In the ensuing months, he started to feel stronger. One day, feeling ambitious, he planted some vegetables in the garden. He didn’t expect to live to harvest them, but he enjoyed being in the sunshine, breathing the ocean air. Others could enjoy the fresh vegetables after he was gone.

Six months came and went. Moraitis didn’t die. Instead, he reaped his garden and, feeling emboldened, cleaned up the family vineyard as well. Easing himself into the island routine, he woke up when he felt like it, worked in the vineyards until midafternoon, made himself lunch and then took a long nap. In the evenings, he often walked to the local tavern, where he played dominoes past midnight.

The years passed. His health continued to improve. He added a couple of rooms to his parents’ home so his children could visit. He built up the vineyard until it produced 400 gallons of wine a year. Three and a half decades later, he was 97 years old — according to an official document he disputes; he said he was 102 in 2012– and cancer-free. He never went through chemotherapy, took drugs or sought therapy of any sort. All he did was move home to Ikaria.

“It just went away,” said Moraitis. “I actually went back to America about 25 years after moving here to see if the doctors could explain it to me.”

“My doctors were all dead.” Moraitis passed away at 102 years of age.

Cancer Defeated: The Lessons To Learn

Avoid conventional therapy for cancer if you want to live a long life. We don’t have the statistics yet, but it’s unlikely that any person on Earth who has pursued aggressive chemotherapy and radiation treatment will live to a 100. In most cases they die within 15 years of their treatment. The restoration of health comes from connecting back to our environment and foods that heal us, not medicine.

The Greek Islands are famed for healthy cuisine, so it may come as no surprise that Grecians have fewer cases of heart disease. Staples, including virgin olive oil, greens like arugula and Swiss chard, carbohydrates like chickpeas, lentils and whole-grain bread, and herbs like oregano, parsley and chives, are great for heart health. The traditional diet also minimizes meat consumption with no more than one red meat dish per week.

Although unemployment is high — perhaps as high as 40 percent — most everyone has access to a family garden and livestock. People who work might have several jobs. Someone involved in tourism, for example, might also be a painter or an electrician or have a store. “People are fine here because we are very self-sufficient,” said

Thea Parikos who owns a guesthouse in western Ikaria. “We may not have money for luxuries, but we will have food on the table and still have fun with family and friends. We may not be in a hurry to get work done during the day, so we work into the night. At the end of the day, we don’t go home to sit on the couch.”

In the United States, when it comes to improving health, people tend to focus on exercise and what we put into our mouths — organic foods, omega-3’s, micronutrients. We spend nearly $30 billion a year on vitamins and supplements alone. Yet in Ikaria and the other places like it, diet only partly explained higher life expectancy. Exercise — at least the way we think of it, as willful, dutiful, physical activity — played a small role at best.

Ask the very old on Ikaria how they managed to live past 90, and they’ll usually talk about the clean air and the wine. Or, as one 101-year-old woman put it, “we just forget to die.” The reality is they have no idea how they got to be so old. And neither do we. To answer that question would require carefully tracking the lifestyles of a study group and a control group for an entire human lifetime (and then some).

We do know from reliable data that people on Ikaria are outliving those on surrounding islands (a control group, of sorts). Samos, for instance, is just eight miles away. People there with the same genetic background eat yogurt, drink wine, breathe the same air, fish from the same sea as their neighbors on Ikaria. But people on Samos tend to live no longer than average Greeks. This is what makes the Ikarian formula so tantalizing and proven in scientific study.

If you pay careful attention to the way Ikarians have lived their lives, it appears that a dozen subtly powerful, mutually enhancing and pervasive factors are at work. It’s easy to get enough rest if no one else wakes up early and the village goes dead during afternoon naptime. It helps that the cheapest, most accessible foods are also the most healthful — and that your ancestors have spent centuries developing ways to make them taste good.

It’s hard to get through the day in Ikaria without walking up 20 hills. You’re not likely to ever feel the existential pain of not belonging or even the simple stress of arriving late. Your community makes sure you’ll always have something to eat, but peer pressure will get you to contribute something too. You’re going to grow a garden, because that’s what your parents did, and that’s what your neighbors are doing. At day’s end, you’ll share a cup of the seasonal herbal tea with your neighbor because that’s what he’s serving. Several glasses of wine may follow the tea, but you’ll drink them in the company of good friends.

Every one of these factors can be tied to longevity. That’s what the $70 billion diet industry and $20 billion health-club industry do in their efforts to persuade us that if we eat the right food or do the right workout, we’ll be healthier, lose weight and live longer. But these strategies rarely work. Not because they’re wrong-minded: it’s a good idea for people to do any of these healthful activities.

The problem is, it’s difficult to change individual behaviors when community behaviors stay the same. In the United States, you can’t go to a movie, walk through the airport or buy cough medicine without being routed through a gantlet of candy bars, salty snacks and sugar-sweetened beverages. The processed-food industry spends more than $4 billion a year tempting us to eat. How do you combat that? Discipline is a good thing, but discipline is a muscle that fatigues. Sooner or later, most people cave in to relentless temptation.

As our access to calories has increased, we’ve decreased the amount of physical activity in our lives. In 1970, about 40 percent of all children in the U.S. walked to school; now fewer than 12 percent do. Our grandparents, without exercising, burned up about five times as many calories a day in physical activity as we do. At the same time, access to food has exploded.

Ikaria’s lifestyle plays a very important part in their longevity. Ikarians stay active by walking most of the time which lowers depression, weight and mortality. Their diet is high in vegetables, fruits, high-quality olive oil and fish. They eat very little red meat.

Instead of drinking cows milk, the people of Ikaria drink organic goat’s milk most of their lives. This organic milk is rich in antibacterial compounds as well as tryptophan. Most of the cows milk we drink today is pasteurized and filled with many growth hormones.

For people to adopt a healthful lifestyle, they need to live in an ecosystem, so to speak, that makes it possible. As soon as you take culture, belonging or purpose out of the picture, the foundation for long healthy lives collapses. The power of such an environment lies in the mutually reinforcing relationships among lots of small nudges and default choices.

There’s no silver bullet to keep death and the diseases of old age at bay. There are no real secrets either. It’s about living life the fullest, being true to yourself, connecting with others, eating real food and being physically active effortlessly. Everything else just flows after that.

By Dave Mihalovic
Dave is a Naturopathic Doctor who specializes in vaccine research, cancer prevention and a natural approach to treatment.